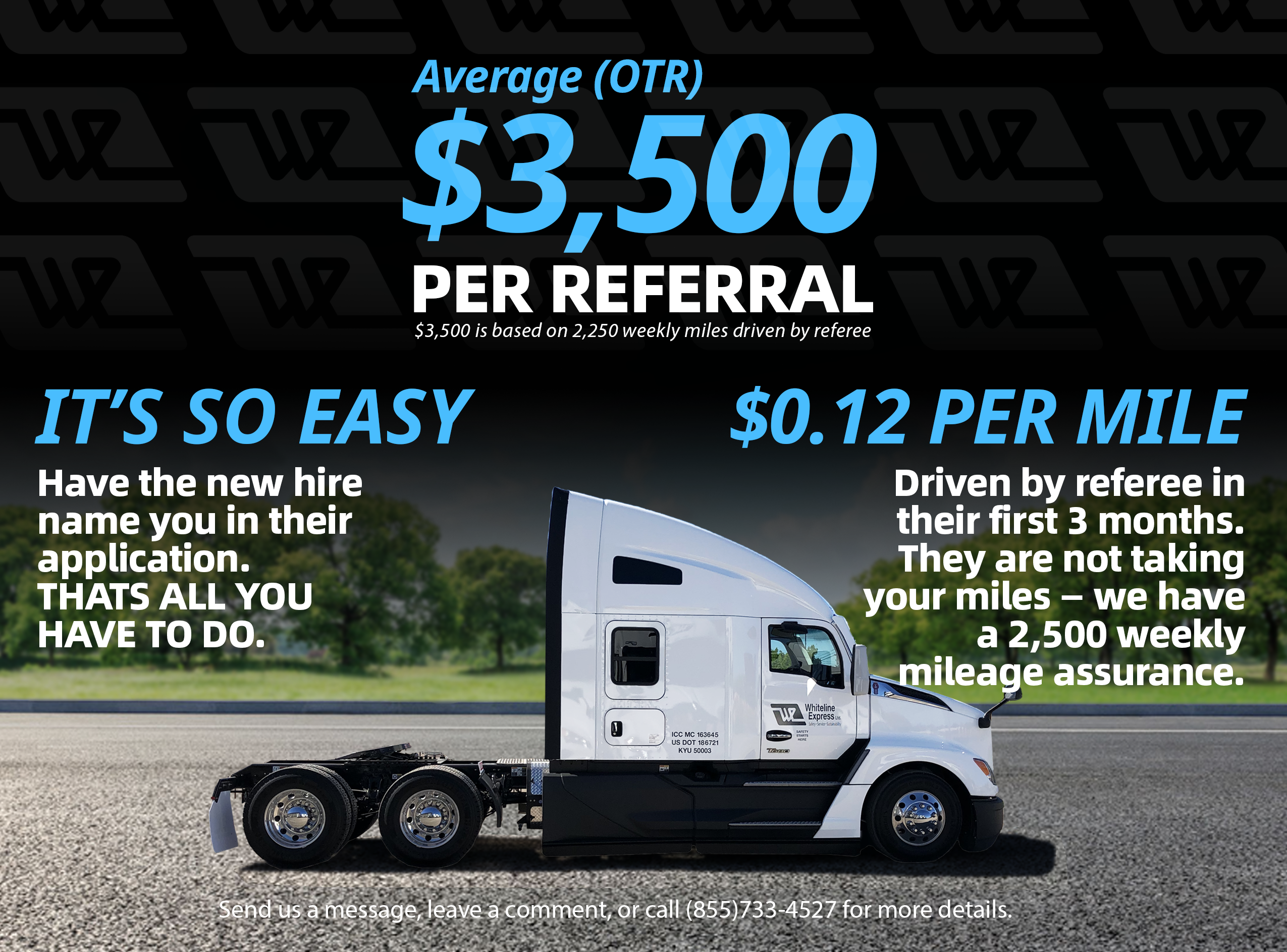 The company has plenty of benefits — the pay is really solid, the drivers are treated well, and the company is extremely reliable. But one recruiting point stood above the rest for me: the referral bonus for over-the-road drivers.

Not a lot of drivers take advantage of our referral bonus and I cannot figure out why. I’m not sure if it’s a lack of awareness or possibly the fear of losing miles to another driver (which will not happen) — whatever the case is, there needs to be more people bringing in referrals. Here’s why.

Whiteline Express’s referral bonus puts up to $4,000 in drivers’ pockets for doing almost nothing at all

When I say it’s easy to get Whiteline’s referral bonus, I’m not exaggerating at all. There’s a single step: make sure the driver you’re referring puts your name on their application. That’s it. That’s all you have to do. That action alone could get you up to $4,000.

There’s no catch; this isn’t a pyramid scheme. It is as good and as easy as it sounds.

Now, there are specific things that have to happen in order to get this but once you’ve finished your only task, there’s nothing but free money coming in. Your work is done. So how does the bonus actually work?

It gets a little bit complicated, but I’ll give you a quick breakdown.

Once the driver you’ve recommended completes onboarding and starts driving, you will earn $0.12 per mile for their over-the-road driving in the first three months of their employment. The payments come in monthly and the driver does have to complete that month. That said, if the driver only finishes a single month of driving and quits halfway through the next, you will have been paid from that first month. Usually, that would be over $1,000.

The smart move is to refer drivers to our company.

After repeatedly asking our recruiters why more drivers don’t do this, I finally got an answer. Most existing drivers are afraid that the driver they refer is going to take their miles. It’s a valid concern and definitely something that happens at smaller companies.

Whiteline Express is not a small company — there are plenty of miles to go around.

We have a fleet of over 300 trucks and extremely consistent loads for drivers. Nobody at this company is struggling to accumulate miles — you will get what you’re looking for, no matter who you refer. If you’re not convinced, our 2,500 weekly mileage assurance will keep your miles safe.

The referral bonus can benefit new hire drivers too. Here’s how.

The best part about Whiteline’s referral bonus is that it doesn’t just apply to existing drivers. It can actually benefit prospective drivers too.

Let’s say you’re already considering driving for Whiteline Express but you haven’t actually applied yet. You can reach out to an existing WE driver, put their name in your application, and then split the bonus (you didn’t hear this from me). That’ll put upwards of $2,000 in each of your pockets. It is important to note that this will be off the books — you’re going to have to trust the existing driver to split this money with you.

Here are some stipulations to stay aware of:

The referral bonus for day-pay drivers is great, too

I’m spending all of this time talking about the over-the-road referral bonus for a reason — it’s really good. That said, we have a respectable day-pay bonus system too and it’s much simpler than the over-the-road bonus. Here’s how that works.

If you refer a day-pay driver to Whiteline Express, you will earn $1,500. Here’s how that money is spread out.