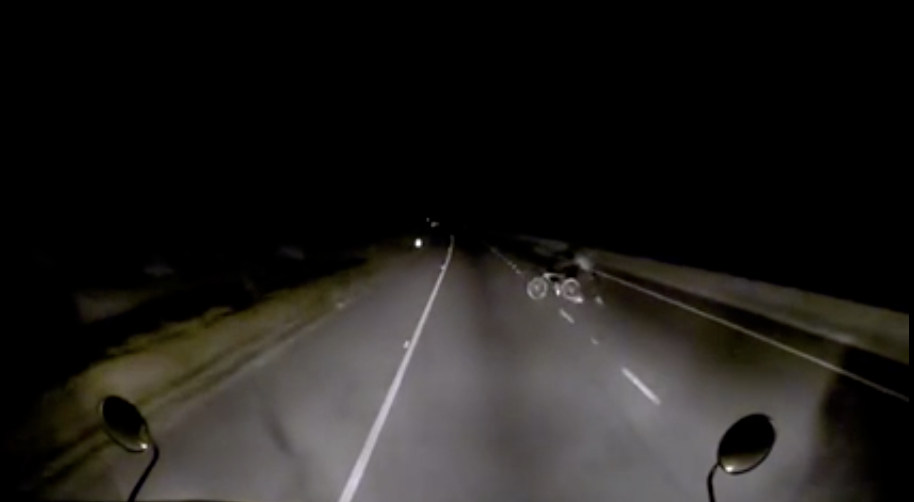 People get into the trucking industry for a few reasons. Some drivers are introverted people and enjoy their alone time while some simply like the money associated with it. A large handful, however, are in it for the adventure. Over-the-road drivers are able to take long trips and see all parts of the country.

A few days ago, a clip was uploaded to the r/Truckers subreddit that showed one of the more bizarre moments caught on camera by a driver.

A pedestrian threw a bicycle into a semi-truck, resulting in… well, nothing.

We’ve heard of people throwing eggs, rocks, and pretty much anything that can travel through the air at vehicles. Even if you’re not a CDL driver, you’ve probably seen your fair share of strange things while driving at night. But this one is probably weirder than anything you’ve seen before.

The video, which will be linked below, shows a driver with a dashcam struggling to stay awake on a night drive. The beginning of the video almost makes you think that the driver is going to cause something to go awry, but he manages to pull himself together.

Suddenly, the driver squints and looks ahead in the distance — clearly, something has his attention.

Suddenly, a pedestrian comes into view with a bike by his side. He gives it a quick push, sending it directly into the path of the driver’s 18-wheeler. The truck runs over the bike and continues to drive. Nothing more transpires.

What was the pedestrian trying to do?

Some believe that the pedestrian was trying to cause the truck to crash, allowing him to move in and steal the driver’s belongings or the truck’s cargo. It could have simply been a sadistic person who wanted to cause a crash for no reason.

Either way, it failed. Miserably.

If you’re a driver, this is a good reminder to keep your eyes peeled — especially if you’re driving at night. You can’t expect something like this to happen but it’s good to always be alert and aware of your surroundings.